Biden to call out racist ‘terrorism’ behind Buffalo shooting 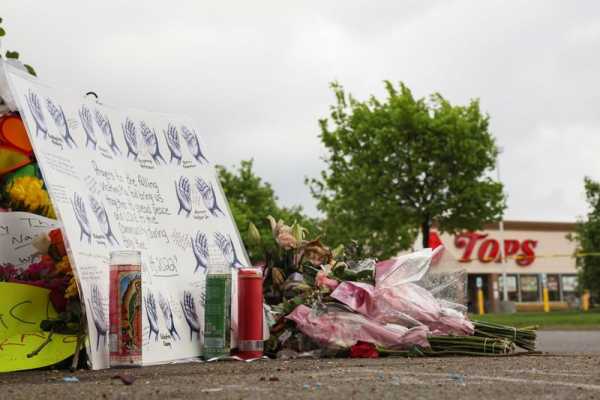 Biden, joined by his wife, Jill, and a variety of New York political leaders stopped at the memorial set up under a tree to pay their respects near the supermarket where gunfire rang out.

Authorities say Payton Gendron, 18, carried out an act of “racially motivated violent extremism” when he opened fire with a semi-automatic rifle on Saturday at the Tops Friendly Market in a predominantly African-American neighborhood of Buffalo, New York. He struck 13 people with gunfire, killing 10.

After visiting the supermarket, the Bidens went behind closed doors at the Delavan Grider Community Center and met the families of the victims.

White House press secretary Karine Jean-Pierre told reporters aboard the Air Force One flight to Buffalo that Biden would comfort families of the victims and meet with members of law enforcement and first responders to express gratitude for their bravery.

He will make remarks at a local community center at 1 p.m. EDT.

“The president will call this despicable act for what it is – terrorism motivated by a hateful and perverse ideology that tears at the soul of our nation,” she said.

“He will call on all Americans to give hate no safe harbor and to reject the lies of racial animus that radicalize and divide us, that led to the act of racist violence we saw on Saturday that took the lives of 10 Americans,” Jean-Pierre said.

She said Biden will call on Congress to keep “weapons of war off our streets” and keep guns out of the hands of criminals. He will “call on Americans to seek a more perfect union and embrace the diversity that has made us the world’s strongest and most dynamic nation in the history of the world,” she said.

The scene in Buffalo was an all-too-familiar one for Biden, who once again took up the role of consoler-in-chief.

Biden told Americans he ran for president to restore the soul of America, following predecessor Donald Trump’s failure to denounce a deadly white supremacist rally in Charlottesville, Virginia, and took office weeks after a deadly attack on the U.S. Capitol that included racially motivated groups.

But the Buffalo trip will also showcase how little Biden has achieved on stamping out a rise in white supremacist groups or curbing gun violence, with many Republican lawmakers blocking efforts to advance gun control measures and the country suffering a rash of mass shootings in recent months.

A White House National Security Council spokesperson on Monday said the Biden administration was implementing a “government-wide national strategy to counter domestic terrorism, which President Biden directed his national security team to develop on his first full day in office, recognizing that has evolved into the most urgent terrorism threat the United States faces today.”

A top FBI official told Congress in November that the bureau was conducting around 2,700 investigations related to domestic violent extremism, and the Department of Justice said in January it was creating a new unit to counter domestic terrorism.

Police on Sunday confirmed that they were investigating Gendron’s online postings, which included a 180-page manifesto he was believed to have written outlining the “Great Replacement Theory,” a conspiracy theory that white people were being replaced by minorities in the United States and elsewhere.