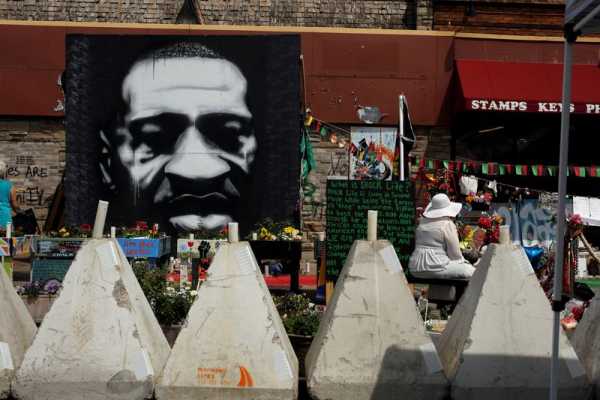 The order will direct all federal agencies to revise their use-of-force policies, create a national registry of federal and local officers fired for misconduct and use grants to encourage state and local police to ban chokeholds and neck restraints unless deadly force is required, officials said.

It restricts the use of no knock entries to a limited set of circumstances, such as when an announced entry would pose an imminent threat of physical violence.

The order covers roughly 100,000 federal law enforcement officials but the White House hopes to use the power of federal spending to expand it to the more than 700,000 officers at the state and local level.

Floyd, a Black man suspected of passing a counterfeit bill, was killed when Derek Chauvin, a white Minneapolis police officer, knelt on his neck as three other officers looked on. The incident triggered a wave of protests over racial injustice months before Biden was elected.

Biden promised to push police reform as president, but negotiations in Congress on a bill collapsed last September.

The executive order will call for creation of national standards for the accreditation of police departments and seek to tie portions of future grant money to earning accreditation, officials said.

The White House has sought to win the support of the civil rights community without angering law enforcement officials.

“We know full well that an executive order cannot address America’s policing crisis the same way Congress has the ability to, but we’ve got to do everything we can,” NAACP president Derrick Johnson said in a statement. “There’s no better way to honor George Floyd’s legacy than for President Biden to take action by signing a police reform executive order.”

Chauvin was sentenced to 22-1/2 years in prison last year after his conviction on murder charges. One of the three officers pleaded guilty last week to aiding and abetting manslaughter in the May 25, 2020, incident.

The White House scheduled a signing ceremony at 4 p.m. on Wednesday (2000 GMT) at which Biden will be joined by members of Floyd’s family, civil rights advocates and law enforcement officials.

The order asks federal law enforcement to meet or exceed a Justice Department policy that allows force only when no reasonably effective, safe, and feasible alternative exists and emphasizes de-escalation.

The executive order is needed to restore the public’s trust in law enforcement, a senior administration official said.

“Without that trust, victims don’t call for help. Witnesses do not step forward. Crimes go unsolved, and justice is not served. Simply put more just policing makes our communities safer,” the official said.