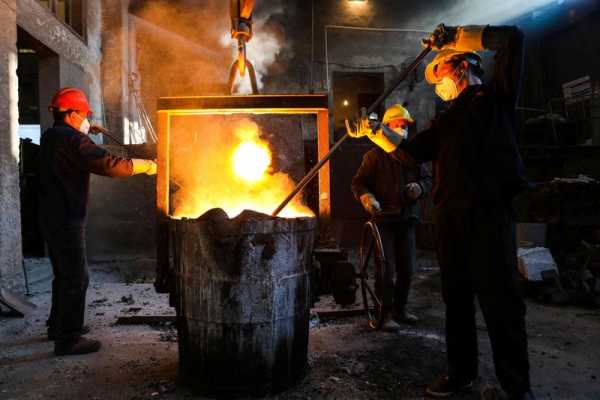 By Min Zhang and Dominique Patton

BEIJING (Reuters) -China’s annual crude steel production fell for the first time in six years in 2021, retreating from record levels it logged in 2020 as the country steps up efforts to contain emissions in its mammoth ferrous sector.

Beijing had urged the industry since the beginning of 2021 to keep full-year steel production at no more than the previous year’s levels to reduce pollutants and greenhouse gas emissions, as the country vowed to reach its carbon peak by 2030.

The target was seen “unlikely” to be achieved as robust downstream demand from the construction and manufacturing sectors boosted profits at mills and sent China’s steel output in the first six months nearly 12% higher than the same period in 2020.

However, steel production has started to contract on both an annual and monthly basis since July when the government tightened environmental controls. An unexpected power shortage – fuelling raw material prices – and a debt crisis in the property market also dented demand for the industrial metal.

Steel production in the last month of the year stood at 86.19 million tonnes, up from November’s output of 69.31 million tonnes but was still 6.8% lower compared with December 2020, the statistics bureau said.

December’s average daily output was at 2.78 million tonnes, jumping more than 20% from a month earlier, according to Reuters calculations based on the NBS data.

Looking forward, analysts expect the coming Lunar New Year and Beijing Winter Olympics to continue to weigh on production, before consumption gradually picks up after the holidays.

A government consultancy anticipated that China’s steel demand will fall slightly this year, and crude steel production will dip around 0.7% from 2021.