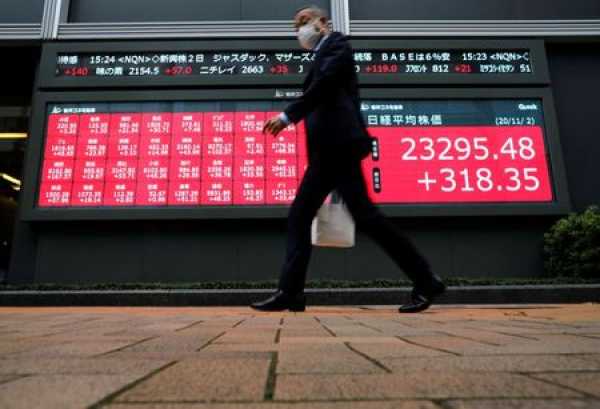 “There is a slow realisation that we have seen peak economic growth perhaps, certainly the summer rebound is done,” Hewson said.

A burst of data out of China showed growth in its factory and retail sectors continued to falter in August with output and sales growth hitting one-year lows as fresh coronavirus outbreaks and supply disruptions threatened its economic recovery.

Meanwhile, UK inflation hit a more than nine-year high last month after the biggest monthly jump in the annual rate in at least 24 years, though largely due to a one-off boost that analysts said was likely to be temporary.

The UK data contrasted with figures from the United States on Tuesday which showed that Consumer Price Index (CPI) in August posted its smallest gain in six months, suggesting inflation has probably peaked, aligning with Fed Chair Jerome Powell’s long-held belief that high inflation is transitory.

Lower inflation suggests the Fed will be under less pressure to begin trimming its vast asset purchases, and, as a result, the yield on the benchmark 10-year note fell as low as 1.263%, its lowest since Aug. 24.

“Inflation is not something we think will go away soon. While the base case is for inflation to moderate over a two-three year horizon, we are not betting on sharp falls in inflation,” said Valentijn van Nieuwenhuijzen, chief investment officer at Dutch asset manager NN IP.

“The Covid impact on supply chains has been enormous so it would not be surprising to see some stickiness in inflation.”

MSCI’s broadest index of Asia-Pacific shares outside Japan dropped 0.8%, while Tokyo’s Nikkei shed 0.5%, moving off a more than 31-year closing-high the day before.

After the Chinese data, Chinese blue chips were down 1%.

“This is not a dip, it is a falling trend that will last at least until the end of this year,” said Iris Pang, chief China economist at ING said of the Chinese data.

Shares in property developer Evergrande, which is scrambling to raise funds to pay its many lenders and suppliers, fell for the third consecutive day on Wednesday, losing as much as 5% to their lowest since January 2014.

An index tracking gaming stocks fell 22%, while Wynn Macau fell as much as 28% to a record low.

Oil prices gained on a larger than expected drawdown in crude oil stocks in the United States, with U.S. crude gaining 1% to $71.19 a barrel and Brent crude rising 0.9% to $74.31 per barrel.

Spot gold was little changed, trading at $1,801 per ounce, having fallen from a one week peak of $1,808.50 on which it hit on prospects for lower interest rates.