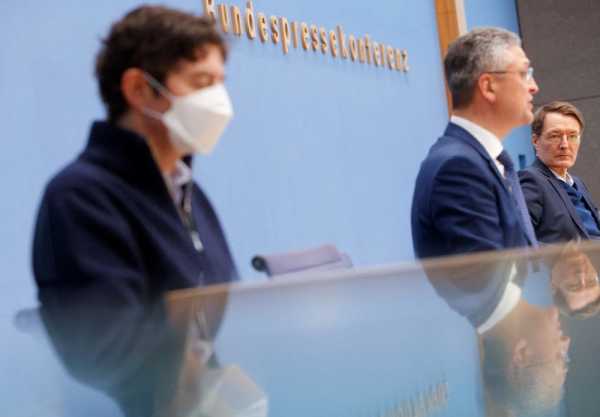 BERLIN (Reuters) -German health officials warned on Friday the coronavirus remained a serious threat as the Omicron variant is set to completely replace Delta in the coming days in a nation whose vaccination rates lag much of western Europe.

Omicron often leads to a milder course of disease, but any positive gains are cancelled out by there being far too many cases, senior virologist Christian Drosten said, underscoring the need for vaccinations.

Drosten said some 3 million people over the age of 60 have not yet been vaccinated and almost 9 million have not received a booster shot, which makes them vulnerable to the highly contagious variant.

“The gap in vaccinations is our greatest obstacle,” he said.

Germany has a relatively low vaccination rate compared to other countries in western Europe: 72.5% of the population is considered fully vaccinated while 45.9% have had a booster shot.

Italy, Spain and France have are around or above the 75% mark, while Portugal and Malta have over 80% of the population fully vaccinated.

The coronavirus will have to be allowed to run its course at some point, said Drosten, as continually re-vaccinating the population was not feasible.

He added that the new Novavax vaccine should be available from Feb. 21.

Lothar Wieler, head of the Robert Koch Institute (RKI) for infectious diseases, said Germany would begin prioritising who could get a PCR test due to Omicron’s prevalence.

Health authorities and laboratories have warned of a testing crunch as they struggle to keep up with demand.

Austria, which also saw a one-day record this week, and the Netherlands were declared high-risk travel areas on Friday.