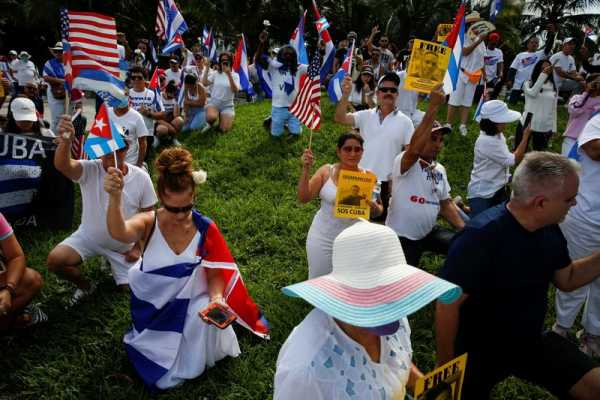 Dissidents in Cuba have for several weeks been preparing a “Civic March for Change” following nationwide protests in July, the largest on the island since Fidel Castro’s 1959 revolution. Rights groups say more than 1,000 people were detained following those rallies and hundreds remain in jail.

The government of President Miguel Diaz-Canel has prohibited Monday’s march in Havana as well as protests planned for other Cuban cities, saying they are part of a destabilization campaign by the United States, which maintains a Cold War-era embargo on Cuba. U.S. officials have denied the allegations.

Demonstrators clad in white to show support for Cuban dissidents gathered in a park on Sunday in eastern Miami, and a collective prayer for the civil rights of Cubans was held later in the afternoon at Miami’s Our Lady of Charity National Shrine, which honors the Roman Catholic patron of Cuba.

“Today’s activity is more than anything else moral support for our people … to show them that they are not alone,” said Niurka Prestamo, a 45-year-old realtor who attended the demonstration.

The rally in Miami took place around the same time as Yunior Garcia, a playwright and dissident leader, was expected to leave his house in Havana to march alone, with a white rose in hand, to underscore the non-violent nature of his movement.

Garcia had said he would depart his home at 1 p.m. But nearly two hours later, it appeared he was still inside.

Government supporters surrounded his house early in the afternoon, and had draped the building in Cuban flags, obscuring the view of Garcia’s window from the street.

U.S. Secretary of State Antony Blinken on Sunday condemned “intimidation tactics” by the Cuban government ahead of Monday’s planned march in Cuba and vowed the United States would pursue measures seeking “accountability” for the crackdown.

A Facebook group called Archipielago, led by Garcia, is at the front of Monday’s planned protests – which coincide with Cuba’s reopening of its borders to tourism following restrictions tied to the COVID-19 pandemic.

Archipielago says it has 31,500 members, more than half of whom are inside Cuba. The group in September sought official permission for the march, which was quickly denied.

Miami has the United States’ largest Cuban-American population, which grew in the years after the 1959 revolution.

About a quarter of Archipielago’s members live in the United States, the group says, including 1,200 in Miami.

The city was a hotbed of anti-Castro conspiracy efforts during the Cold War, and its Cuban-American residents as a group remain staunchly opposed to the Havana government, although some in the younger generation have sought to re-establish connections in recent years with the island.

“We are here to give a cry of freedom. We want to tell the people that they are not alone,” said Miami demonstrator and journalist Serafin Moran, 43. “Today we send a greeting, a message to the people of Cuba: If you are in the streets, so are we.”

Small rallies in support of the Cuban dissidents took place in other cities across the globe on Sunday, from Canada to Spain.

(Reporting by Brian Ellsworth in Miami, Marc Frank in Havana and Matt Spetalnick in Washington; Editing by Dave Sherwood and Peter Cooney)