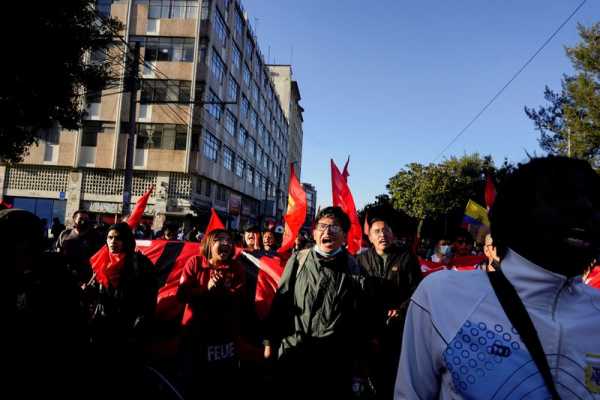 Iza was released late on Tuesday following a ruling by a judge in the city of Latacunga. He had been detained for about 24 hours after the government said he led road blockades and other allegedly violent acts that halted public services.

Iza’s lawyer called the detention illegal, but the government has said he will be tried.

“While the most sensitive problems aren’t resolved, we’re going to continue supporting this fight, which is constitutional,” Iza said in an address over social media.

Access roads north and south of Quito, the capital, have been blocked since Monday by protesters demanding that Lasso freeze the price of gasoline, declare a moratorium on small-farmers’ bank debts, and limit oil and mining expansion.

Demonstrators have said the protests, which have been marked by invasions of oil fields, the torching of police cars and the detention of some police by protesters, will be indefinite.

“It’s not just a whim of (Iza’s) to call this march. It’s because Ecuadoreans feel the high cost of living,” Carlos Sucuzhanay, head of indigenous organization Ecuarunari told local media. “We want the president to reorient himself to work in service of the country.”

CONAIE, the group led by Iza, said on Twitter on Wednesday that there were protests in several of Ecuador’s Andean and Amazon provinces.

State oil company Petroecuador has lost some 2,500 barrels of oil as a result of sabotage and halted operations at its facilities.

A group of people tried to enter one of Petroecuador’s stations in the province of Sucumbios. The Ministry of Defense confirmed 10 soldiers were wounded in the clash.

“Our door is open to dialogue, but we won’t give in to violent groups that seek to impose their rules,” Lasso wrote on Twitter.

At least 20 people have been detained during demonstrations, while some 15 patrol cars have been damaged, with several attacks carried out on private property, according to the government. Iza said that at least 14 people have been injured by the police.

Lasso has said he will not allow protests to affect economic recovery and any vandalism will be punished.