Home›News›Explainer-What are investors focused on for the next Fed chair?
News

Explainer-What are investors focused on for the next Fed chair? 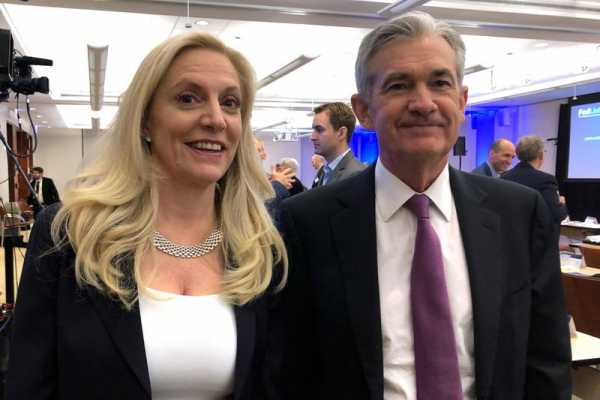 Still, it is not seen as a done deal. Biden is still weighing whether to keep Powell as chair or elevate Fed Governor Lael Brainard to the post, an administration official said on Wednesday.

Here are some questions investors may have:

Online betting website PredictIt gave Powell a 74% chance of being confirmed by the U.S. Senate as of Thursday while the odds that Brainard would be nominated were 26%.

Whoever Biden nominates will first be vetted by the Senate Banking Committee before going to a vote in the full Senate, where a simple majority would be needed.

Powell, a Republican, has done more than any recent Fed chair to cultivate relationships on Capitol Hill, meeting regularly with members of both parties. At least one Democratic member of the Senate Banking Committee, Jon Tester of Montana, has endorsed Powell for a second term, while one other Democrat, Elizabeth Warren of Massachusetts, has said she would oppose him. Most observers believe Powell would get the backing of most, if not all, of the Republicans.

Why is it important for markets?

While the leadership of the U.S. central bank is always important to markets, Biden’s decision takes on heightened significance this year as the Fed has announced plans to start tapering its $120 billion in monthly bond purchases. At the same time, the Fed is monitoring a historic surge of inflation as global supply chains remain disrupted by the coronavirus pandemic. Some investors have said they would like to keep the status quo to ensure predictability.

Moreover, Powell’s current term, due to run out in February 2022, has proven positive for risk assets, with the S&P gaining 74.5% since his appointment on Feb. 5, 2018 and hitting a series of new records in part helped by emergency measures the Fed launched in response to the coronavirus pandemic.

Brainard, who was nominated to the Fed board by former President Obama in 2014, is widely seen as more dovish, or favoring looser monetary policy, than Powell in part because of her push to retain super-easy monetary policy until there is more progress on job recovery.

However, while more dovish policies may be better for riskier assets like stocks, investors have expressed caution about changing the horses at this point in the race to recover from the pandemic. Some thought that a change at the helm risked a misinterpretation of Fed policy and could increase volatility.

What else could change?

A change at the top would also have consequences for Wall Street regulation on a slew of issues from bank capital and fair lending to climate-change risks and cryptocurrencies. Over the past four years Brainard opposed many de-regulatory changes led by Vice Chair for Supervision Randal Quarles and backed by Powell, and many on Wall Street expect her to be much tougher on the industry if she gets the job.

“Replacing one dove by another would not necessarily change the outlook for monetary policy but would place greater emphasis on aspects like bank regulation and climate change,” wrote analysts at Societe Generale.