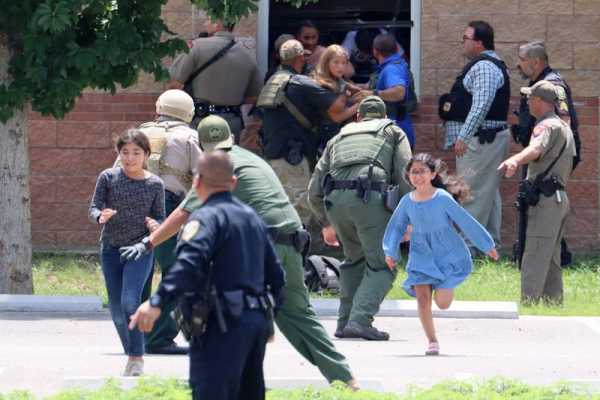 Why the officers waited in the hallway nearly an hour before entering and fatally shooting the gunman is at the heart of an ongoing probe by the Texas Department of Public Safety into the massacre of 19 children and two teachers in the deadliest U.S. school shooting in nearly a decade.

Investigators are also still searching for a motive for the attack. Salvador Ramos, a high school dropout, had no criminal record and no history of mental illness.

At least two children placed 911 calls from a pair of adjoining fourth-grade classrooms after 18-year-old Ramos entered on Tuesday with an AR-15 semi-automatic rifle, Colonel Steven McCraw, director of the Texas Department of Public Safety, said earlier this week.

The same girl had implored the 911 operator to “please send the police now” at 12:43 p.m. and again four minutes later.

The on-site commander, the chief of the school district’s police department, believed at the time that Ramos was barricaded inside and that children were no longer at immediate risk, giving officers time to prepare, McCraw said.

“From the benefit of hindsight where I’m sitting now, of course, it was not the right decision,” McCraw said. “It was the wrong decision, period.”

Standard law enforcement protocols call for police to confront an active school shooter without delay, rather than wait for backup or more firepower, a point McCraw acknowledged.

McCraw described other moments when Ramos might have been thwarted. A school officer, responding to calls about an armed man who crashed a car at the funeral home across the street, drove past Ramos as he crouched beside a vehicle on school property. Police have said Ramos fired at two people standing outside before scaling a fence onto school grounds.

The door that gave Ramos access to the building had been left propped open by a teacher, McCraw said, in violation of school district security policies.

As criticism of the response by law enforcement grew, police officers from cities as far away as Houston and Dallas began arriving in Uvalde to help support local authorities, in some cases providing protection to Uvalde’s own police, the mayor and the gun shop where Ramos purchased his arsenal.

Police cruisers were parked outside the home of Pedro Arredondo, the school district’s police chief. The police response to the shooting has been sharply criticized by McCraw and Texas Governor Gregg Abbott, among others.

Abbott, a Republican and staunch gun rights proponent who addressed the meeting in a pre-recorded video, seized on apparent police lapses in Uvalde, telling a news conference later he was misled and “livid about what happened.”

President Joe Biden, a Democrat who has urged Congress to approve new gun restrictions, will visit Uvalde on Sunday to comfort families and pay respects to the young victims.