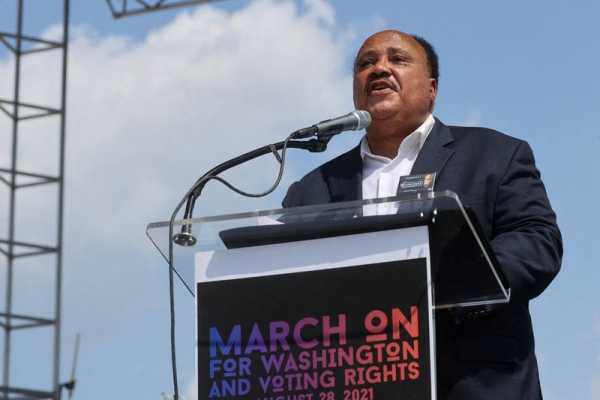 As part of the annual Martin Luther King Jr. Day D.C. Peace Walk, the King family and more than 100 national and local civil rights groups strode across the Frederick Douglass Memorial Bridge calling on President Joe Biden’s Democrats to pass a bill in the U.S. Senate.

The march followed a disappointing week for Biden, who went to the Capitol to urge Senate colleagues to change filibuster rules so they could overcome Republican opposition to the bill, only to be forcefully rejected by two conservative Democrats who effectively hold veto power in the evenly split chamber.

In a separate speech livestreamed to the late Rev. King’s Ebenezer Baptist Church in Atlanta, Vice President Kamala Harris also urged the Senate to act, warning that efforts to restrict voting in some U.S. states could make it more difficult for millions of Americans to vote.

“We must not be complacent or complicit,” Harris said. “We must not give up, and we must not give in. To truly honor the legacy of the man we celebrate today, we must continue to fight for the freedom to vote, for freedom for all.”

At a rally before Monday’s March, King’s son, Martin Luther King III, praised Democrats for passing a sweeping infrastructure bill last year, but implored them to push through voting-rights legislation.

“You were successful with infrastructure, which was a great thing,” King said to a crowd of hundreds, “but we need you to use that same energy to ensure that all Americans have the unencumbered right to vote.”

King III, his wife, Arndrea Waters King, and their daughter Yolanda Renee King, led the march across the bridge.

“We need to make sure that everyone in this country can get to the polls, vote, and have their vote heard,” said Lisa Meunier, 53, of Washington, who joined the marchers.

The bill before the Senate would expand access to mail-in voting, strengthen federal oversight of elections in states with a history of racial discrimination and tighten campaign finance rules. Democratic supporters argue it is needed to counter a wave of new restrictions on voting passed in Republican-led states that election observers say would make it harder for minority and low-income voters to cast ballots.

Top Senate Democrat Chuck Schumer has said the chamber would take up the bill on Tuesday, a delay from his earlier plan to hold a procedural vote on the bill by Monday, the federal holiday honoring King.

Republicans, who hold half the 100 seats in the Senate, are united in opposition to the bill, which they brand a partisan power grab. That leaves Biden and Schumer just one path to passing it: persuading conservative Democratic Senators Joe Manchin and Kyrsten Sinema to agree to change the chamber’s filibuster rule that requires at least 60 senators to agree on most legislation.

Yolanda Renee King addressed comments to the two holdout senators after the march.

“Senator Sinema, Senator Manchin, our future hinges on your decision, and history will remember what choice you make,” she said.

Some civil rights groups in Georgia that helped propel Biden to presidential victory during the 2020 election boycotted his voting rights speech in Atlanta last week, saying they were disappointed by Biden’s lack of action.

“Black voters risked everything – including their own health at the height of the pandemic – to vote Biden and Senate Democrats into office,” wrote Cliff Albright and LaTosha Brown, co-founders of Black Voters Matter in a response to Biden’s speech.

“It’s time that officials in Washington treat us and our rights with the same level urgency.”

Should these groups lose their enthusiasm for Democrats, it could increase the party’s chances of losing their razor-thin majorities in at least one chamber of Congress in the Nov. 8, 2022, election.

Yolanda Townsend, who called herself a “senior” from the Washington, D.C., area, said at Monday’s rally that she had found Biden’s Georgia speech timely and forceful.

“I wish it was drawn earlier, but I think a line in the sand has been drawn and you’re either with us or against us,” Townsend said.