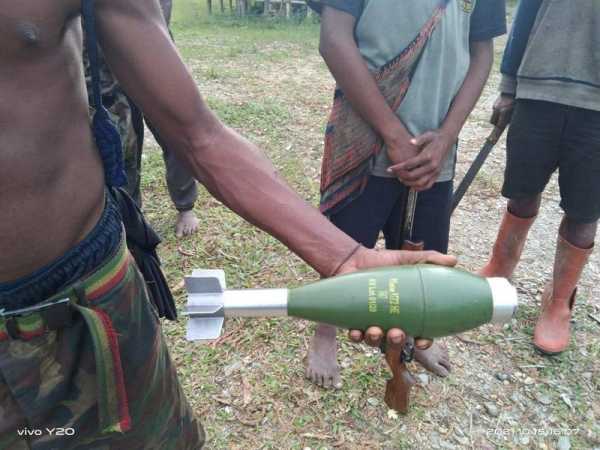 The alleged procurement for the state intelligence agency, known as BIN, was not disclosed to the parliamentary oversight committee that approves its budget, three members told Reuters.

The London-based monitoring group, Conflict Armament Research (CAR), said the mortar rounds were manufactured by Serbia’s state-owned arms-maker Krusik and later modified to be dropped from the air rather than fired from a mortar tube. It said the arms sent to BIN also included 3,000 electronic initiators and three timing devices typically used to detonate explosives.

The 81mm mortar rounds were used in attacks in October on villages in Papua, an Indonesian province where a decades-long campaign by armed separatists has accelerated in recent years, according to CAR, an eyewitness, and human rights investigators working on behalf of several church groups.

Reuters was not able to independently confirm certain aspects of the CAR report, including whether BIN had received the shipment. Reuters also could not establish who authorised the purchase of the munitions or who used them in Papua.

BIN and the Ministry of Defence did not respond to requests for comment about the purchase or use of the mortar shells.

The parliamentary oversight committee is holding a closed hearing next week with BIN, and the weapons purchase will be discussed, one committee member said.

Tubagus Hasanuddin, a former general who also sits on the parliamentary committee that oversees BIN, said that the intelligence agency can acquire small arms for its agents’ self defence but that any military-grade weapons “must be for education or training purposes and not for combat”.

“We need to conduct a hearing first with BIN and check the reason. Afterwards we will check the legality,” he said.

No one was killed, although homes and several churches burned down, according to one witness and investigators working for eight human rights and church groups to document the attacks.

“It’s clear cut that these mortars are offensive weapons that were used in civilian areas,” said Jim Elmslie, convenor of the West Papua Project at the University of Wollongong, who submitted CAR’s report to the UN Human Rights Office of the High Commissioner in April. “This is a breach of humanitarian law.”

BIN is a civilian agency under the direct authority of Indonesia’s president, Joko Widodo, widely known as Jokowi. The president’s office did not respond to a request for comment about the purchase or use of the weapons.

A spokesman for Indonesia’s military, Col. Wieng Pranoto, told Reuters its forces did not drop the munitions on the villages. He declined to say whether BIN deployed the munitions.

Indonesian law requires the military, police and other government agencies to seek permission from the Ministry of Defence to buy arms, and requires them to use materiel produced by the domestic defence industry if it is available. The country’s state-owned arms-maker PT Pindad produces mortar rounds, and they are part of the armed forces’ arsenal.

A defence ministry source familiar with the procurement system said the ministry never approved the purchase or any regulation that would allow BIN to acquire the munitions.

“It raises questions of why BIN would want them,” this person said.

Another member of the parliamentary committee that oversees BIN said he was personally investigating the findings in CAR’s report to determine whether there was any wrongdoing. He said he had approached BIN and PT Pindad for an explanation but “found a lot of giant walls”.

“There must be something that is very, very sensitive about it,” he told Reuters.

PT Pindad’s spokesperson and chief executive’s office did not answer detailed questions from Reuters about how the mortar rounds were procured or who used them.

One of the company’s commissioners, Alexandra Wuhan, declined to discuss specifics of the purchase, but said: “Pindad is obliged and subjected to Indonesia’s laws, rules and regulations regarding military and civilian arms procurements, likewise BIN as the end user. Pindad cannot be held responsible for the when and where the arms are used by Indonesian authorities. We do not have such control.”

CAR is a Europe-based arms monitor whose clients have included the European Union, the United Nations, and the U.S. and British governments.

The organisation analysed photos of ordnance used in the attacks in Papua and formally requested information on the shells from the Serbian government via the country’s mission at the United Nations in New York on Nov. 26.

CAR declined to share Serbia’s response, citing protocols. Stevanovic, and Serbia’s UN Mission, did not respond to a Reuters request to share the note verbale.

The report said Serbia confirmed Krusic made the M-72 high-explosive mortar rounds, which were sold to Serbian arms supplier Zenitprom DOO in February 2021 along with the 3,000 electronic initiators and timing devices. The munitions were then exported by Zenitprom DOO to PT Pindad for BIN, the group says.

On Oct. 6, 2020, at the beginning of the procurement process, BIN provided Serbian authorities with end-user certificate No. R-540/X/2020, confirming that they would be the exclusive users of the items in the consignment and that the munitions would not be transferred or sold to other parties without the permission of the Serbian authorities, the report said. No request to transfer the weapons was made before the Papua attack, the Serbian government told CAR, according to the report.

In its report, CAR said Serbia confirmed the lot numbers on the shells used in Papua matched those of the ones purchased by BIN.

Some details of the report that Reuters was not able to independently confirm include the mortar shells’ matching lot numbers, the transfer of the munitions consignment to BIN or whether BIN complied with the end-user certificate. Reuters was unable to determine who had modified the mortar rounds or why BIN had purchased the timers and igniters.

CAR said BIN had provided the Serbian government with a “delivery verification certification,” although Reuters could not independently confirm the weapons had arrived in BIN’s hands.

An independence rebellion has simmered in resource-rich Papua since 1969, when a United Nations-supervised vote involving only about 1,025 people led to the former Dutch colony becoming part of Indonesia.

The security situation in Papua has “dramatically deteriorated” since April 2021, when separatists killed the head of BIN’s Papua office in an ambush, according to a statement by three U.N. special rapporteurs in March. Between April and November last year, they said there were “shocking abuses” by the government. The Indonesian government rejected their statement.

Starting on Oct. 10, 2021, helicopters and drones fired into and dropped munitions on eight villages in the Kiwirok district for several days, according to the eyewitness interviewed by Reuters, human rights investigators and several local church leaders.

“They dropped bombs with drones,” Pastor Yahya Uopmabin told Reuters, saying he watched the assault from nearby mountains, where many residents had fled. “Places of worship, houses of residents were burning.”

Eneko Bahabol, a Papuan investigator working for a consortium of eight human rights and church groups, said 32 mortar rounds were dropped, including five that didn’t detonate. Reuters has seen photos of the unexploded rounds.

The photos from CAR show the mortar shells carry the markings of the Serbian state-owned arms-maker. Samuel Paunila, head of the ammunition management advisory team at the Geneva International Centre for Humanitarian Demining, confirmed the mortar rounds had Krusic markings.