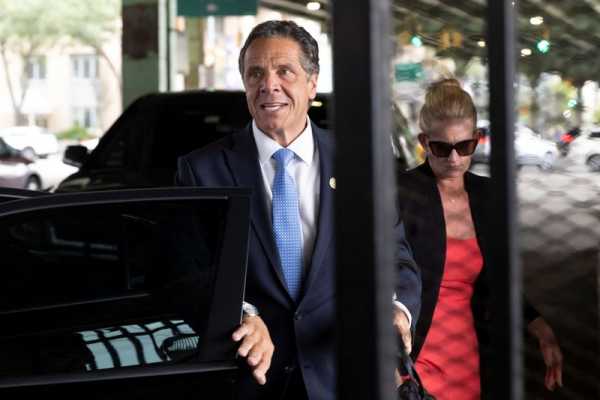 Cuomo resigned in August in the middle of his third term as governor after a five-month official inquiry found that he had sexually harassed 11 women.

Albany County Sheriff Craig Apple filed a “forcible touching” charge against Cuomo last month based on one woman’s accusation that Cuomo groped her under her blouse at the Executive Mansion in the New York state capital of Albany.

But the charge against Cuomo was “potentially defective,” Albany County District Attorney David Soares wrote in a letter to the judge dated Thursday because it failed to include a sworn statement from the accuser.

Soares asked Albany City Court Judge Holly Trexler to delay Cuomo’s arraignment, which had been scheduled for Nov. 17, for 60 days to give his office more time to review the case and possibly avoid a procedural dismissal. Cuomo’s attorney supported the request, and the judge granted the delay, scheduling Cuomo’s arraignment for Jan. 7, a spokesperson for Soares said.

Soares said in his letter that his office had been investigating Cuomo for months when the sheriff surprised him with a criminal filing.

“We were in the middle of that investigation when the Sheriff unilaterally and inexplicably filed a complaint in this Court. Unfortunately the filings is this matter are potentially defective in that the police-officer-complainant failed to include a sworn statement by the victim such that the (state) could proceed with a prosecution,” the Soares letter said.

Soares also said his office was still reviewing hundreds of hours of videotaped testimony and volumes of documents produced by the five-month probe that was conducted by independent lawyers under the direction of state Attorney General Tish James.

Sheriff Apple did not immediately respond to a Reuters request for comment. In comments to the Albany Times Union, he said his office followed proper procedures.

“There was sworn testimony included, and we followed the policies and protocols set to interview victims of sex crimes,” Apple said.

Apple previously regretted that Soares and others were surprised by his charge, saying his office filed the paperwork for review and intended to meet with prosecutors to determine whether a criminal arrest warrant or a criminal summons would be issued.

The process, however, moved much more quickly than planned, and the information was leaked to the news media, he said.

Cuomo, who has maintained his innocence, said he only resigned in order to avoid putting the state through the turmoil that would follow his efforts to fight the charges.

If convicted on the misdemeanor charge, he would face a possible sentence of up to a year in jail.