Home›News›Ortega and Murillo, the power couple with an iron grip on Nicaragua
News

Ortega and Murillo, the power couple with an iron grip on Nicaragua 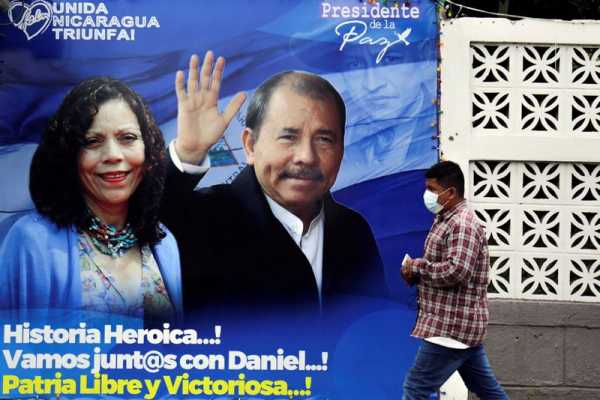 In April 2018, after mass street protests against Ortega’s rule put his presidency in jeopardy, the former Marxist guerrilla sent in the police and paramilitary forces to crush the protesters.

More than 300 people were killed and thousands injured in the crackdown.

Three years later, Ortega and his wife, Vice President Rosario Murillo, again employed authoritarian tactics to keep their grip on power: imprisoning dozens of opponents, including seven candidates for the presidency, and winning a lopsided re-election on Sunday, according to preliminary results announced https://www.reuters.com/world/americas/nicaraguas-ortega-seeks-re-election-with-opposition-candidates-jail-2021-11-07 by Ortega’s handpicked election authorities.

While many observers predicted a historically low turnout, the electoral authority said participation of eligible voters was above 65%, with 76% of them backing Ortega’s ruling Sandinistas.

The United States and the European Union, among others including neighboring Costa Rica, have rejected the election as undemocratic.

“Daniel Ortega and Rosario Murillo’s goal is to remove any possible doubts about their survival in power,” said Tiziano Breda, an analyst at the International Crisis Group think tank.

Murillo, who is also the government spokeswoman, did not respond to a Reuters request for comment.

Ortega, whose second stint in power began in 2007, will now remain Nicaragua’s leader until 2027.

A constant companion has been Murillo, who he married in 2005 and made vice president in 2017. The 70-year-old poet has become one of the most controversial and ubiquitous figures in Nicaragua, the second poorest country in the Americas.

With Ortega rarely making public appearances, Murillo has become the face of the government. She appears daily on radio and television channels controlled by her family https://www.reuters.com/investigates/special-report/nicaragua-politics-ortega to tout the government’s work and rail against political foes. Neither speaks about why they are seeking re-election.

Ortega, born on Nov. 11, 1945, was raised in a middle-class family that opposed the regime of dictator Anastasio Somoza.

In 1963, he dropped out of university and joined the leftist Sandinista National Liberation Front (FSLN). In 1967, aged 22, Ortega was jailed for a bank robbery. He spent seven years in prison until he was released in a prisoner exchange with high-ranking officials of the Somoza government.

Murillo is from Nicaragua’s elite. Born in 1951 to a family of cotton farmers, she is related to General Augusto Sandino, a Nicaraguan revolutionary who gave his name to the FSLN.

As well as reading and writing poems, she hid guerrilla fighters in her house in Managua. Murillo was briefly imprisoned by the Somoza regime and went into exile in Costa Rica in 1977, where she became romantically involved with Ortega.

In 1979, Ortega and Murillo returned to Managua to help the Sandinistas overthrow Somoza, the last dictator of a U.S.-backed family dynasty established in the 1930s. The couple have since had seven children.

“The two of them are different but complementary, and when they get together, they’re the harmful and unscrupulous force that governs Nicaragua,” said Fabian Medina, author of a biography of Ortega, “Prisoner 198.”

“Ortega is passive, introverted, backed by his years of imprisonment and guerrilla warfare in the Sandinista Front and with zero empathy for the suffering of others. Murillo is impetuous, vindictive, outgoing and with inexhaustible energy.”

Murillo, known for her gaudy, hippie-style outfits and using flowery religious language in speeches, is due to succeed Ortega if he cannot finish his new term. For years rumors have circulated that Ortega is in poor health, diplomats and analysts say, though he did make a public appearance on Sunday alongside Murillo.

Ortega first tasted real power in 1981 as head of the junta which governed Nicaragua after the Sandinistas successfully overthrew Somoza. In 1984, the country held its first democratic elections in almost half a century and Ortega won by a landslide. International observers declared the elections credible and fair.

Washington did not want a Marxist government in its “backyard” and supported and funded the right-wing “Contras,” armed insurgents who attempted to overthrow the FSLN. Ortega and the Sandinistas became international heroes for the left, seen by many as the plucky David standing up to the U.S. Goliath.

But the Contra war, along with Washington’s economic embargo against Nicaragua and the Sandinistas’ mismanagement, laid waste to the economy, eroding eroded Ortega’s popularity and leading to his defeat in the 1990 presidential elections.

Ortega’s reputation was dealt a major blow in 1998 when Zoilamerica Ortega Murillo, Murillo’s daughter from a previous marriage, accused Ortega of sexually abusing her since she was 11. Murillo called her daughter a “madwoman,” a “liar” and a “traitor.” Ortega has never spoken publicly on the subject.

Ortega rode out the scandal and in 2006 was elected president again. Those who knew the couple say something changed from that point.

(This story was refiled to fix typographical error in headline.)