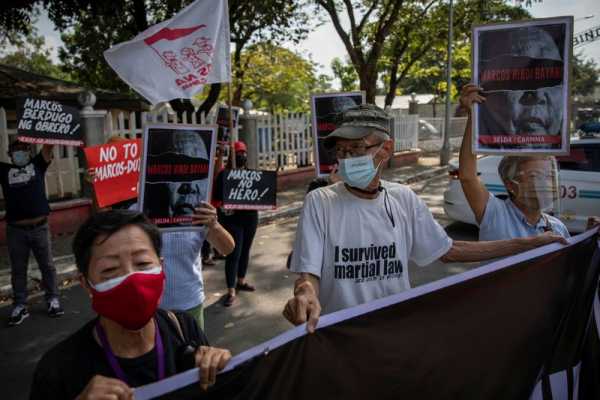 “We are here to inform the people that Marcos was no hero. He was a dictator,” said human rights lawyer and former lawmaker, Neri Colmenares, who had been tortured and jailed during the 14-year martial rule.

Colmenares and at least a hundred other protesters stood at the entrance of a cemetery for national heroes, shouting “Never again, never again to Martial Law”, while carrying placards and a huge black banner with the words “Marcos hindi bayani (Marcos is no hero).

The protesters staged a caravan that ended at the cemetery in the capital, Manila, where five years ago Marcos was buried with military honours, almost 30 years after his death in Hawaii.

Many in the Philippines were angered by the way Marcos’s family had kept the timing of the burial secret.

“We hope our message will reverberate throughout the nation, because another Marcos is wanting to go back to Malacanang (presidential palace),” Colmenares said, referring to the only son and namesake of the late dictator who is running for president in next year’s election.

During martial law, 70,000 people were imprisoned, 34,000 were tortured, and 3,240 were killed, according to data from Amnesty International. Thousands of victims were paid compensation using millions from Marcos Swiss bank accounts recovered by government.

The Marcos family is among the country’s most famous dynasties and despite its fall from grace, it has retained far-reaching and powerful political connections.