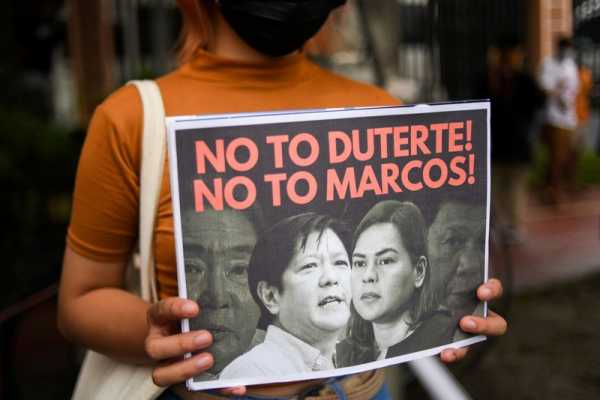 Former congressman Satur Ocampo, one of the group’s convenors, said the petition, like one filed by another group, is grounded on Marcos’s over two-decade old conviction for tax evasion.

“Public officials who violate the internal revenue code are perpetually disqualified from holding any public office and participating in election,” Ocampo, who fought the Marcos dictatorship, told Reuters, citing an article of the code.

The late dictator ruled the Philippines for almost two decades until his 1986 overthrow in the “people power” revolution. He died in exile in 1989.

His wife and children have repeatedly denied allegations that billions of dollars of state wealth were plundered while Marcos was in power, estimated in 1987 to be worth $10 billion.

A trial court convicted Marcos Jr of tax evasion in 1995 for failing to file his income tax returns from 1982 to 1985. The conviction was upheld by an appeals court in 1997.

However, Marcos Jr has been elected governor, congressman, and in 2010, as a senator.

Although he ran for public office previously in the past, despite the conviction, Ocampo said “this does not mean it can’t be raised anymore.”

The poll body has scheduled a preliminary conference for Nov. 26 on the earlier disqualification complaint filed by a group representing political detainees, human rights and medical organisations against Marcos.

Marcos, 64, has said the petition “is without merit and has no legal basis”.

He announced on Tuesday that the daughter of President Rodrigo Duterte has agreed to be his vice presidential running mate, confirming weeks of speculation of an alliance between two powerful families.

Australia to invest $73 million in quantum science as critical technology