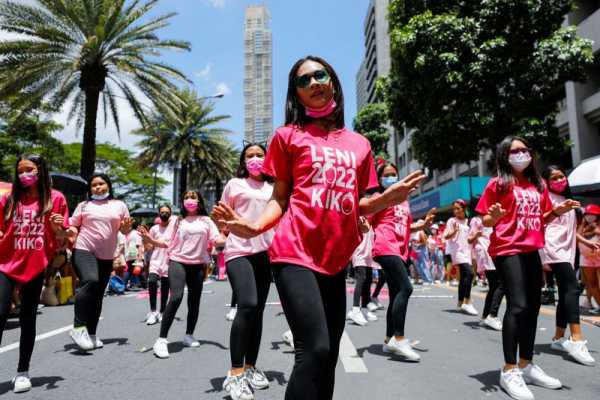 Up to 65 million Filipinos are eligible to cast ballots on Monday to decide on the successor to President Rodrigo Duterte after six years in power, plus thousands of other posts, from lawmakers and governors to city mayors and councillors.

A two-horse presidential race has emerged between Vice President Leni Robredo and frontrunner Ferdinand Marcos Jr, the son and namesake of a strongman whose two-decade rule ended with his overthrow in a 1986 “people power” uprising.

Tens of thousands of supporters gathered in the capital Manila at rallies for Robredo and Marcos, braving the scorching afternoon heat hours before candidates were due to arrive.

The location of Robredo’s rally was symbolic, held along Ayala Avenue, where a huge march took place in 1983 after the assassination of senator Benigno Aquino, an icon of the struggle against the Marcos dictatorship.

“Robredo has helped many people and they appreciate her,” said Mary Ann Ileto Fernandez, who was celebrating her 27th birthday at the rally.

“While many people do not openly show support, we know they will vote for her.”

If opinion surveys are accurate, Robredo, 57, will need a late surge, or a low turnout if she is to win the presidency, with Marcos, a former congressman and senator, leading her by over 30 points having topped every poll this year.

If that deficit holds, Marcos, 64, could be the first Philippines president to be elected with a majority vote since the end of his father’s rule.

Marcos Jr was due to address what was expected to be a huge crowd at a casino resort alongside Manila Bay, which his camp said was an event to show appreciation for an outpouring of public support.

Marcos’s lead has been attributed to his team’s astute use of use of social media to reach younger voters, to discredit Robredo and present what political experts say is a counter narrative to historical accounts of his father’s rule. Marcos recently praised his father as a “genius”.

Monday will be a rematch of the 2016 vice presidential election which Marcos had also looked set to win, before losing by just 200,000 votes to Robredo. He fought hard to overturn the result, which the Supreme Court upheld.