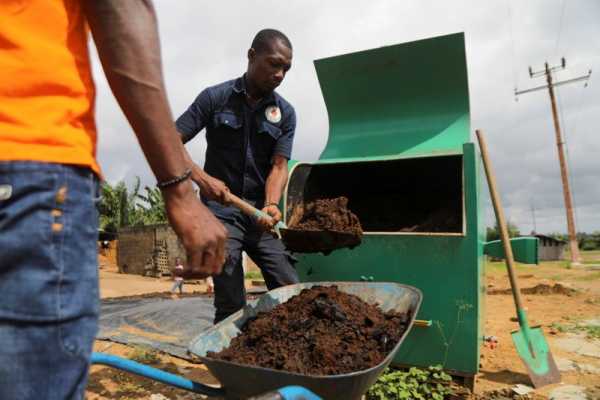 NANDIBO, Ivory Coast (Reuters) – Award-winning waste converters are helping farmers in Ivory Coast turn mountains of agricultural by-products into compost for their fields or gas for their cooking stoves.

The small green “KubeKo” box was dreamt up by chemical engineer Noel N’guessan to make use of the 30 million tonnes of waste generated by crop production in the West African country each year and other biowaste like animal dung.

“It’s natural, it’s organic, it’s appropriate for our soil, for our fields – we will triple our production,” Ahouri said after scattering the compost at the roots of his rustling palms.

In July, the invention netted N’guessan an innovation award worth over $33,700 from the United Kingdom’s Royal Academy of Engineering.

By then, the team had already sold 50 composters to Ivorian cocoa, palm oil and mango farms. The boxes cost $700 to produce, according to the academy.

The team also produces biodigesters – similar metal box-like contraptions that can fuel two hours of cooking on the gas generated from 5 kg (11 lb) of waste per day, while producing litres of liquid compost.

This kind of gas production could be a sustainable alternative source of cleaner energy in rural areas in West Africa, according to a 2018 report https://ec.europa.eu/jrc/en/science-update/energy-agricultural-organic-waste-africa-water-energy-food-ecosystems-approach by the European Commission. Every cubic metre of biogas, a mixture primarily of methane and carbon dioxide, is estimated to replace the equivalent of 5 kg of wood or 3 kg of coal, it said.

“Instead of throwing our waste on the streets, we collect it,” said farmer Ahouri. “We are protecting the environment because instead of leaving it there, we use it.”

Like the Titanic – Lebanon’s orchestra keeps playing as country sinks