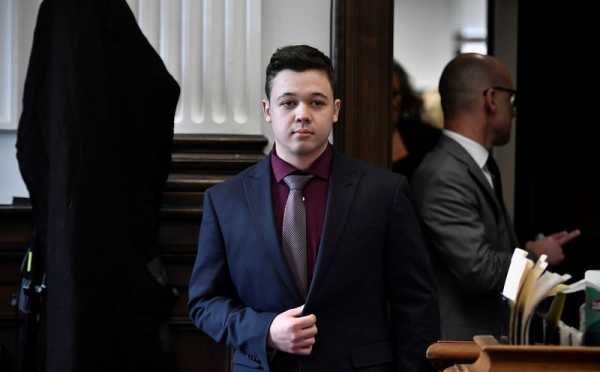 McGinniss, a journalist, got emotional on the stand as he talked about trying to save the life of a man Rittenhouse had just shot four times with a semi-automatic rifle during racial justice protests in Kenosha, Wisconsin.

McGinniss described taking Joseph Rosenbaum to the hospital and his efforts to comfort him on the drive there even though the man was unresponsive. He promised to get a beer together once it was all over.

His testimony served two objectives for the prosecution: shining a light on the violence wreaked by Rittenhouse’s weapon and the humanity of Rosenbaum, whose erratic behavior that night had become a major focal point for the defense.

But under cross-examination by Rittenhouse’s defense counsel, the narrative began to shift.

McGinniss, a video director for the Daily Caller, a conservative media outlet, told defense attorney Mark Richards that Rosenbaum appeared “very angry” as he screamed an expletive and lunged for the barrel of the teen’s gun.

Kenosha County Assistant District Attorney Thomas Binger then began to question his own witness aggressively, suggesting McGinniss had engaged in “complete guesswork” in speculating as to Rosenbaum’s intent.

The question hit a nerve.

“Well, he (Rosenbaum) said ‘Fuck you,’ and then he reached for the weapon,” McGinniss responded before bristling again at a question implying that he had offered a view on why Rosenbaum had lunged for the teenager’s gun.

“When did I say that I gave a reason? I just said what he was trying to do,” McGinnis said. “I will say that as many times as you want me to, but I have no clue why he was doing what he did, but I saw him go for the front portion of the weapon.”

The exchange highlighted the challenge prosecutors faced throughout two weeks of testimony, with witness after witness offering evidence largely supporting the teenager’s assertion that he only fired when he was attacked.

The jury on Friday acquitted the teenager on all charges including the killing of Rosenbaum, 36, and Anthony Huber, 26, and the wounding of Gaige Grosskreutz, 28.

The prosecution contended that Rittenhouse provoked Rosenbaum by raising his rifle and that the other two men he shot had been trying heroically to disarm an “active shooter” who posed a deadly threat to people around him.

The exchange between Binger and McGinnis was one of a handful of dramatic moments that legal experts said almost certainly stuck with the jury as they deliberated on Rittenhouse’s fate.

Patrick Cafferty, a criminal defense attorney in Wisconsin, said McGinniss “got away” from Binger as a witness, coming across to the jury as traumatized from what he had experienced that night but never blaming Rittenhouse for it.

“He appeared to be oriented toward justifying what Rittenhouse did,” Cafferty said. “I think he helped Rittenhouse more than he helped the state.”

The Daily Caller did not respond to requests to make McGinniss available for an interview.

Prosecutors also struggled to put a serious dent in Rittenhouse’s testimony when he took the stand in a risky legal maneuver to offer his account of what had happened that night.

Rittenhouse held firm that he had been in Kenosha to provide medical aid, had only used his weapon to protect himself and had not wanted to harm anyone that night.

Assistant District Attorney James Kraus acknowledged in court that the teen’s testimony was problematic for the prosecution, saying a reasonable juror could believe Rittenhouse had not intended to kill anyone, a state of mind required by the three homicide charges lodged against him.

But even before Rittenhouse took the stand, another critical witness had already weakened the state’s case, legal observers said.

Grosskreutz was viewed as a crucial witness for the state because he was the only person to have survived the shootings and could speak to the perceived threat he and others felt as they chased the teen down the street.

Under examination by prosecutors, Grosskreutz testified that he believed Rittenhouse needed to be stopped and he had never intended to use the handgun he was holding, only moving toward the teen because he thought Rittenhouse was preparing to fire.

Then defense attorney Corey Chirafisi elicited a major concession. Using still images of the seconds before Rittenhouse fired a bullet into Grosskreutz’s arm, Chirafisi pressed the witness twice on what triggered the shot.

“When you were standing three to five feet from him with your arms up in the air, he never fired, right?” Chirafisi asked.

“It wasn’t until you pointed your gun at him, advanced on him, with your gun, now your hands down pointed at him, that he fired, right?” Chirafisi continued.

Benjamin Van Severen, a defense attorney in Milwaukee, said it was an “Oh my goodness” moment for prosecutors, playing right into Rittenhouse’s self-defense argument.

The prosecution was also hurt by Grosskreutz, a trained paramedic, testifying that he feared for Rittenhouse’s safety when he saw a crowd chasing the teenager, yelling at him.

“Him being the paramedic in fear for (Rittenhouse’s) safety,” Van Severen said. “That’s another one of those ‘Oh crap’ moments.”