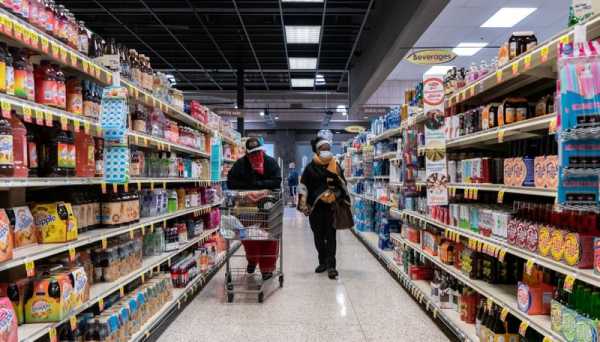 Excluding the volatile food and energy components, the CPI gained 0.6% after climbing 0.2% in September. The so-called core CPI jumped 4.6% on a year-on-year basis, the largest increase since August 1991, after being steady at 4.0% for two straight months. Economists polled by Reuters had forecast the overall CPI shooting up 0.6% and the core CPI rising 0.4%.

Inflation is heating up again as the economic drag from the summer wave of COVID-19 infections, driven by the Delta variant, fades and supply bottlenecks persist. Trillions of dollars in pandemic relief from governments across the globe fueled demand for goods, leaving supply chains overstretched.

The nearly two-year long pandemic has upended labor markets, causing a global shortage of workers needed to produce raw materials and move goods from factories to consumers. The government reported on Tuesday that producer prices increased strongly in October, reversing a slowing trend in the monthly PPI that had become entrenched since spring.

Though the Federal Reserve last week restated its belief that current high inflation is “expected to be transitory,” most economists are skeptical, also noting that wages are rising strongly as companies scramble for workers.

“Supply disruptions and the recovery of services poses a substantial concern that higher-than-expected inflation could persist for longer than the Fed believes,” said Sam Bullard, a senior economist at Wells Fargo in Charlotte, North Carolina.

“We expect goods inflation to hand the baton to services over the course of the next year, but all signs indicate that supply chain bottlenecks will keep fanning the flames on inflation in the near term.”

The Fed this month started reducing the amount of money it is injecting into the economy through monthly bond purchases. The U.S. central bank’s preferred inflation measure for its flexible 2% target increased 3.6% year-on-year in September.

A recovering global economy is boosting oil prices. Brent crude has gained over 60% this year. The U.S. Energy Information Administration on Tuesday projected a small increase in gasoline prices for 2021 and 2022 in its latest Short Term Energy Outlook, compared with its forecasts last month.

Gasoline prices are at seven-year highs.

With labor scarce, companies are holding on to their workers. In another report on Wednesday, the Labor Department said initial claims for state unemployment benefits fell 4,000 to a seasonally adjusted 267,000 for the week ended Nov. 6.

That was the lowest level since the middle of March in 2020, when the economy almost ground to a halt under the onslaught of mandatory business closures aimed at slowing the first wave of COVID-19 infections. Claims, which have now declined for six straight weeks, are within striking distance of their pre-pandemic level.

The report was published a day early because the federal government is closed on Thursday for the Veterans Day holiday.

The government reported last Friday that the economy added 531,000 jobs in October, with annual wage growth the largest in eight months. The labor force is down 3 million from its pre-pandemic level, making it harder to fill the 10.4 million job openings as of the of August.

“In the current environment it is not unreasonable to think that initial claims can even fall below their pre-COVID levels,” said Veronica Clark, an economist at Citigroup in New York.

“Of course, there are still some upside risks to claims due to layoffs related to vaccine mandates, but these workers might not qualify for unemployment benefits due to violating company policies.”

In terms of the White House’s vaccine mandate, workers at companies with 100 or more employees are required to be fully vaccinated by Jan. 4.