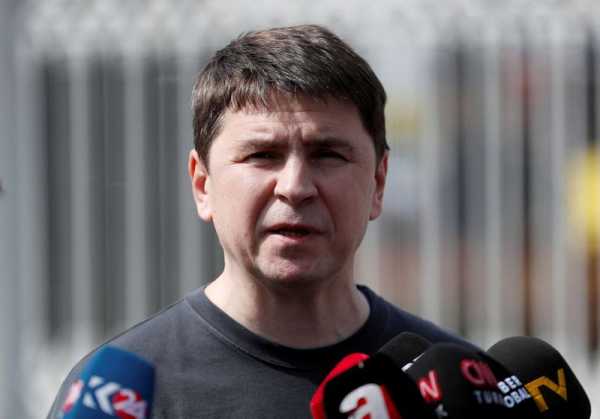 KYIV (Reuters) -Ukrainian presidential adviser and peace talks negotiator Mykhailo Podolyak said on Saturday that any agreement with Russia could not be trusted, adding the only way to stop Moscow’s invasion was by force.

“Any agreement with Russia isn’t worth a broken penny,” Podolyak wrote on the Telegram messaging app. “Is it possible to negotiate with a country that always lies cynically and propagandistically?”

Russia and Ukraine have blamed each other after peace talks stalled, with the last known face-to-face negotiations on March 29. The Kremlin said earlier this month Ukraine was showing no willingness to continue peace talks, while officials in Kyiv blamed Russia for the lack of progress.

Ukrainian President Volodymyr Zelenskiy said the only person worth talking to was Russian President Vladimir Putin, since he made all the decisions.

“It doesn’t matter what their foreign minister says. It doesn’t matter that he sends some negotiating group to us … all these people are nobodies, unfortunately,” he told Dutch television in an interview filmed on Friday.

Putin says Russian forces are on a special operation to demilitarise Ukraine and rid it of radical anti-Russian nationalists. Ukraine and its allies call that a false pretext.

“Russia has proved that it is a barbarian country that threatens world security,” Podolyak said. “A barbarian can only be stopped by force.”

(Reporting in Kyiv by Max Hunder and Ottawa by David Ljunggren;Writing in Melbourne by Lidia KellyEditing by Frances Kerry and Chizu Nomiyama)