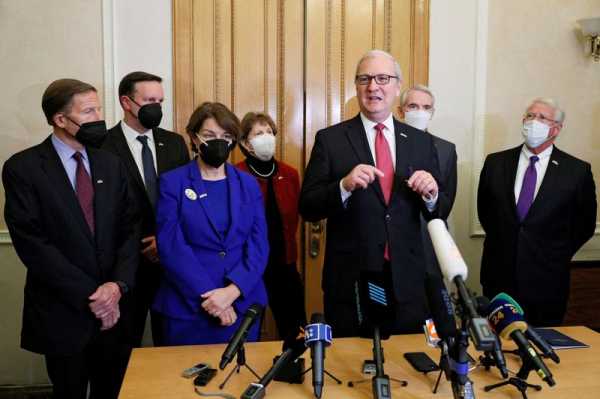 KYIV (Reuters) – A bipartisan group of United States senators promised solidarity and weapons on a visit to Kyiv on Monday while warning Russian President Vladimir Putin against launching a new military offensive against Ukraine.

Kyiv and its Western allies have sounded the alarm after Russia massed tens of thousands of troops near Ukraine’s borders and pressed the United States for security guarantees, including a block on Ukraine joining the NATO alliance.

The United States has been Ukraine’s most powerful backer in its standoff with Moscow after Russia’s annexation of Crimea in 2014 and the outbreak of the war in eastern Ukraine.

“I think Vladimir Putin has made the biggest mistake of his career in underestimating how courageously the people of Ukraine will fight him if he invades,” Senator Richard Blumenthal told reporters.

“And we will impose crippling economic sanctions, but more important we will give the people of Ukraine the arms, lethal arms they need to defend their lives and livelihoods,” he said after the delegation met President Volodymyr Zelenskiy.

These weapons could include Javelin anti-tank missiles, Stinger missiles, small arms and boats, he said.

“And so our message is: there will be consequences if he chooses to violate the sanctity of this democracy,” Senator Amy Klobuchar added.