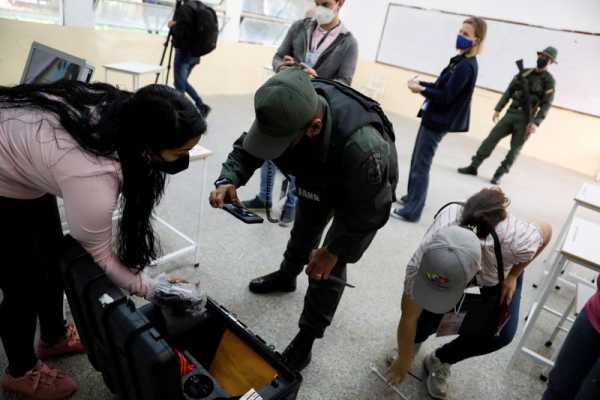 During the elections, over 3,000 state governors, mayors and city councils will be chosen across the South American country, which is beset by a long-running recession and hyperinflation.

Should the opposition lose the 4 state governorships it won in 2017 – out of 23 states – it would lack a powerbase to launch a campaign for presidential elections, due in 2024.

The vote will test the impartiality of Venezuela’s electoral commission, which in May included two opponents among its top five directors, making it the most balanced board in 17 years, its members have said.

European Union election observers will be present at around 1,000 of the 14,400 voting centers, the first such European mission since 2006.

Maduro and opposition leader Juan Guaido, who is backed by the United States, among other countries, both urged supporters to vote on Friday night, though Guaido decried voting conditions.

“I want to see a change in my country, not just in Carabobo but in all of Venezuela,” said Betty Gomez, 48, from the city of Valencia, the capital of Venezuela’s Carabobo state, adding that she planned to vote for an opposition candidate.

Others will back the government’s candidates. Nelson Aparicio, a 44-year-old teacher in Tachira state, which borders Colombia, is betting on the ruling party’s contender to address issues including power cuts and gasoline shortages.

“I believe (Freddy) Bernal doesn’t represent a wealthy demographic, but everyone,” Aparicio said, adding that the country needs to come together in talks.

(Reporting by Vivian Sequera and Mayela Armas in Caracas. Additional reporting by Tibisay Romero in Valencia and Anggy Polanco in San Cristobal; Writing by Oliver Griffin; editing by Diane Craft)